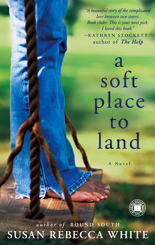 I found this novel at a used bookstore in town.  I didn't really know what I was looking for when I went there...  I was checking out some authors that have been recommended to me and browsing some of the award winning books.  This novel was in with the fiction books and I initially pulled it out because the spine of the book looked like it was in perfect condition.  Then, I saw the cover and, of course, judged it.  I liked the look of it and, after reading the back, decided that it looked like an interesting story.


"Just know that whatever feelings you shove down are going to have to come up again sometime. And some people think it's better to control when it comes up than to have it just one day boil over and take you by surprise." (A Soft Place to Land, Susan Rebecca White, p. 104-105)

A Soft Place to Land by Susan Rebecca White is the story of two half sisters, Ruthie and Julia, who have to deal with the devastating news that their parents were killed in a plane crash while they were on vacation.  Ruthie and Julia are surprised when they hear what is in the will.  Julia, 16, who still has one living parent (her biological father), will be moving in with him and his new wife (we'll call her the evil stepmom).  Ruthie, 13, who has now lost both of her biological parents, is now moving in with an aunt and uncle.  On top of losing their parents, these girls are now, in a sense, losing each other.  The novel, told mostly through Ruthie's story, spans across a few decades and shows the hard times and complicated-ness that is involved in this sister-sister relationship.

When I first picked up the book, I noticed what Kathryn Stockett, the author of The Help, had said about this book: "A beautiful complicated love between two sisters.  Book clubs: This is your next pick.  I loved this book."  Considering how much I loved The Help, I thought that I would also enjoy this one.

I completely agree with Stockett - it was most definitely a nice story about "the complicated love between two sisters."  You never know what kind of effect tragic news, such as the sudden death of two young parents, will have on you.  Especially being right at the center of everything, these girls would have had a lot to go through.  It was nice to see the good and the bad of their relationship after the death of their parents.  Also, not only did it show you what events happened right after the girls hear the news, but the author provides you with chunks of information from different points in their lives.


"I've never felt more grateful for my life than I do today, but I think it's fair to say the gods have put me through some shit." (A Soft Place to Land, Susan Rebecca White, p. 327)

I would recommend this novel if you're looking for something real.  It can be a hard topic to think about, write about, or read about, but Susan Rebecca White gives you an honest look at the relationship between Ruthie and Julia.  There were some parts of the story that I found more interesting than others, and some parts that I found to be a bit slow, but it was a good read.


"Knowing that everyone has a story," Naomi would say, "I find it very hard to judge." (A Soft Place to Land, Susan Rebecca White, p. 262)