I just finished reading my first Anita Shreve book.  My mom had read Rescue recently and when I was searching for my next book through our baskets and bookcases full of novels, she suggested that I read it. 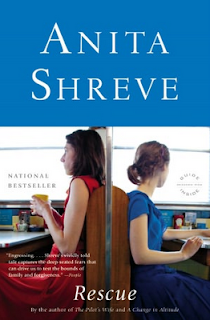 Peter Webster is a paramedic.  On one of his first shifts, he first encounters Sheila, who had been in a DUI accident.  He is particularly curious about her and so he makes a point of visiting her in the hospital.  The medic/patient relationship eventually turns into a bit more.  Eighteen years later, Webster is a single father raising his daughter, Rowan.  When things with his daughter start to go off track, he thinks that maybe he can't be everything that his daughter needs.  With the possibility of Sheila back in the picture, Webster tries to decide if this really is the best thing for his daughter.

I motored through the novel in a few days because it was an easy read.  The novel is told from the point of view of Webster.  One half of the novel was a bit of a love story that allowed you to see into the relationship between Sheila and Webster.  It contained enough details about Webster's job as a paramedic that would keep some readers interested in the novel if they aren't as interested the relationship story.  The other half of the book was less about the love story and more about the father/daughter relationship in the Webster household.


"Do you love her?" his mother asked.
Finally, an easy question.  "I do," he said.  "Very much."  But even as he said it, and as sure as he was that he did, he wondered if he really knew what love, in these circumstances, meant.
(Rescue, Anita Shreve, p. 67)

I liked the story.  It was a little bit predictable, but there were still some aspects that came as a surprise to the reader.  I found that it was a fairly realistic story...  Many households are just like the Webster home, with single parents, broken families, and secrets.  I thought it was neat that Webster was telling stories from his medic calls, although many of these calls had little to do with the storyline itself.

If you're looking for a light and easy read, Rescue may be the one for you!  I think a few more Anita Shreve books may be on my reading list in the future.

P.S. I am a person who often does judge a book based on its cover (although this isn't the only way I choose my books!).  I don't know exactly what I was expecting from this cover, but I liked the look of it.  Somehow, though, I didn't think the story really matched the cover.  Sure, there's a mother and a daughter, but things aren't quite like this in the novel...