Once Upon a Day (Lisa Tucker)

I grabbed Once Upon a Day by Lisa Tucker at the last minute on my way to a last minute supply teaching day.  I wasn't sure if it was the next book I wanted to read, but once I was about two chapters in, I was really intrigued.  (I stumbled upon this book at a bookstore and, even though I hadn't read anything by Tucker or really heard much about her, I decided to buy it after reading the blurb on the back...) 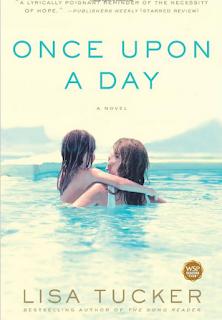 Nineteen years ago, Charles Keenan disappeared from his life with his two children.  Dorothea and Jimmy live with their father, Charles, in a huge house in the middle of nowhere.  He's a very overprotective parent - he won't let his children do anything that he thinks could result in them getting hurt.  That is, no tire swings, no cooking, no painting (because paint is toxic, you know!) and no leaving their property.  They are homeschooled, everything is delivered to them, such as food, and their doctor makes house visits to see them.  Jimmy decided to leave in his 20s to find his mother's family.  When Dorothea is 23, her father becomes ill and she goes out in search of her brother.  She's put into a world she has never known and begins to search for the truth about what really happened in her father's past.


"Tragedy, loss, and especially guilt: these were the real truths of the world, and Lucy knew it.  God help the person who didn't understand this, she thought.  God help themif they have to find out the hard way that the life they're taking for granted is as fragile as a naked heart."  (Once Upon a Day, Lisa Tucker, p. 71)

I loved this novel.  Like really loved it.  I want there to be a movie that follows this story exactly as it's written.  I finished it, wishing that it wasn't over, wanting to know more and more and more.

The novel is written a little differently.  Some chapters used a first person narrative, whereas others used the third person.  Tucker had to let the reader see everything that was going on in different locations and what different characters were thinking and feeling.  I loved the bit of back and forth and really felt that I got to know most of the characters so well.  Tucker did a great job of recounting past stories that were important to the outcome of the novel and characters within it.

I loved the idea of the story.  It kept me interested after a little hook at the beginning, when Stephen and Dorothea's stories start to mesh a bit.  There were so many angles that I thought were covered well and they were all included at exactly the right time in the novel.  I couldn't put it down once I was a third of the way through - I just needed to know what happened next!


"This is the charming coincidence.  When things in the world that are unconnected suddenly connect, and a pattern emerges."  (Once Upon a Day, Lisa Tucker, p. 55)

At first, I thought the novel would be a bit like Room by Emma Donoghue.  Although it's similar in that there is a child who is basically restricted to where he/she is living, it's really quite different.  Dorothea, in this novel, does have a family who loves her and her father would have let her leave when she was ready (as he let her brother leave...).  Jack, in Room, has a mother who loves her, but he really is locked in a prison with his mom.

Lisa Tucker has written a few other books, and I am anxious to read another one of her novels since I was so impressed with this one.

Email ThisBlogThis!Share to TwitterShare to FacebookShare to Pinterest
Labels: Emma Donoghue, Family, Lisa Tucker, Loss, Love, Memorable Quotes, Once Upon a Day, Room, Should Be a Movie