It all started about a month ago.  I was all "I think this year, for my New Years Resolution, I'm going to buy less.  One thing I can do is start using the library more!"  (Realistically, I know that if the wait is too long for a book, I'm not going to wait for it - I'll end up buying it anyway.  But hey, I thought it would be good to try for a while.)  My first "book on hold" library story was a success - I put a book on hold, it got transferred to the library nearest me, and I was able to pick it up a few days later.  Woohoo - this library thing will be awesome.

The story continues at a Christmas party at the beginning of December, when the series "The Black Dagger Brotherhood" came up in conversation.  I was told by a few girls that I MUST read this book.  "Hey," I thought, "let's check if it's at the library."  They had one copy at a different branch, but it was currently checked out.  I put it on hold, knowing that it was due mid-December.  Perfect!

I've been checking the status of my book online (which is an awesome feature) and I noticed that it had been "In Transit" for a few days now.  Since I finished my latest book last night, I was ready for the first book of "The Black Dagger Brotherhood" series and decided to just go ask at the library.

She was very nice at the desk and called the branch it was being transferred from.  This was her end of the conversation.  "I have a patron here who has a book on hold.  It has been in transit since December 21st.  Could you check if it's on your shelf? (pause) It's W-A-R.  The author is J.R. Ward.  The book is called Dark Lover."  (Oh, this is embarrassing... It's not what it sounds like.)  So it wasn't there.  She tells me, "Maybe it's on the shelf here by accident.  The lady at the other desk across the library will be able to help you."

On to desk number two.  She was busy, so I thought, "This could be easy and less embarrassing.  I'll go look for the book on the shelf myself."  Nope, it wasn't there.  During this search, I said to my mother, "Mom, the book is called 'Dark Lover.'  It's not what it sounds like... It's a vampire book that (insert name of friend) said was very good.  This is kind of awkward."

Back to desk number two.  I ask about it, she checks the shelf again and it's not there.  Then she calls the library it was initially from, thinking it could have somehow ended up back there.  What I hear (along with the dozen people who are sitting right next to her at the computers.)  "Hello.  I have a patron here looking for a book.  It's been in transit for a while and maybe it's ended up back on your shelf by accident. (pause)  It's W-A-R.  Author J.R. Ward.  The book is called 'Dark Lover: The Black Dagger Brotherhood series.' Oh you don't need to write it all down.  You can just write down Dark Lover."  Meanwhile, a man shows up at the desk and is laughing (and we also get a few looks from the people at computers).  As I start turning red, I say to him, "It's not what it sounds like."

I find out he works there when he says, "Oh, there's a bin of books downstairs that has been there for a couple days.  I think they're transit books."  He goes down to get the bin of books as my mom and I wait near the movies just in case my book is there.  We see him bring up the box of books and he helps go through them, trying to find the book.  Mom says, "Well, they don't need to be reminded what the title is, at least."  Yes, it's an easy one to remember.  Dark Lover.

They find it and I go to the desk again to check it out.  I thank him, turn to the lady at the desk and say, "Well, I'm going to check out Season 3 of The Muppets, too, so that it doesn't look so bad.  That was really embarrassing."  After she punches in my stuff, the guys asks, "What's the book about anyway?"  I respond, "My friend told me it was good.  I don't even know really, it's like vampires or something."

I made their day.  You're welcome.  Now I have a book to read AND a season of The Muppets to watch. 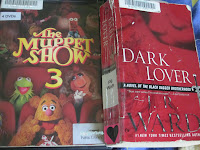 I haven't started the book yet, but it better be worth it.

P.S. They were all extremely nice at the library and I think it was just a little mix up. Had I not asked, it would have sorted itself out (minus the embarrassment).
Posted by Sarah at 9:09 AM