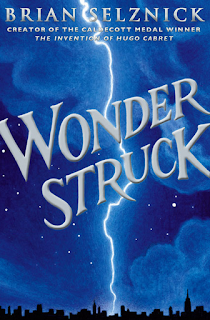 I just finished Wonderstruck by Brian Selznick.  I first heard about this book from this blog, written by a librarian who reads many young adult books.  Often, I just skim what she's read, but when I saw her review about Wonderstruck, I immediately looked for it in the library database.  Since there were quite a few copies available throughout the area, I decided to wait for a bit before checking it out (since I saw that it was a GIANT book and didn't think I had time to read it quite yet).  Walking through Chapters last week, I noticed that Brian Selznick's Wonderstruck has now made it right to the front and center.  I picked up the book and skimmed through it, noticing that a good portion of the book is made up of beautiful art.  After being home for two minutes, I searched for it again and noticed that now, 5 of the 7 copies were currently checked out of the various libraries in town.  I thought I'd better get on it before 30 people put the book on hold before me!  I had a copy transferred to my nearest library and picked it up two days later.  Wow, what a story...

The concept of Wonderstruck:  It's composed of two different and separate stories.  Ben's story is told entirely through words and Rose's story is told through pictures.  Ben is searching for a father that he has never known and Rose is in search of an actress who she reads about in the papers.  Their stories are set 50 years apart - oh, and did I mention that both Rose and Ben have hearing impairments?

I read this book very quickly - partly because it was very good and partly because of the beautiful artwork that fills up many of the pages in the book (and allows you to flip the pages quicker than if they were filled with words).  As you're reading both stories, you can see some similarities.  Both stories are well told and, as a reader, you wonder how Selznick is going to finish (and perhaps mesh together) these separate stories.

Also, let's take a moment here to again say how beautiful the artwork in the book is.  I was unsure when I was starting this book - how I was going to understand a storyline when there are no words to help?  The images do such a good job of telling a solid story.  (Yes, a picture can be worth a thousand words.)

Because of its size and weight, it's not a book I would recommend when you're heading on vacation, but it was a great, quick, young adult read that makes you smile at the end.
Posted by Sarah at 7:33 AM