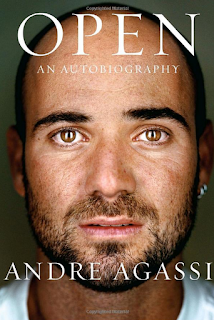 I am on a roll with my non fiction books lately.  The most recent one being Open by Andre Agassi.  I'm a tennis fan, so I read this book despite the fact that he was starting to quiet down his tennis career just as I was starting to regain interest in (watching) the sport.

On the book, Time described the book as "One of the best sports autobiographies of all time.... One of the better memoirs out there, period."  Can't go wrong by reading this, right?

The story is about Andre Agassi. He struggled in school, hated the sport that was forced upon him by his father, and worked hard trying to find out who he was as a person.  He discusses everything from his lowest points to his highest points in the game, specific points in a match (really), his changing relationships with coaches, trainers, and girlfriends, and his struggles with his physical self and injuries.

It surprised me how much you really learn about Agassi in this book.  As fans, we cheer on our favourite athletes, sometimes thinking how lucky they are to be able to play hockey, tennis, basketball, whatever, for a living.  Never do we think that they don't want to be doing what they're doing.  Based on Agassi's interviews with the press at the time, you assume that he's being honest... wrong.  He's human, and when times are hard sometimes it's easier to just let people think what they want to think.  And hopefully you don't let it affect your game, right?  It must be difficult to live a life where your every move, comment, decision and relationship are right out there for the public and media to criticize and comment on.  It was an eye opener.


"If I had time, if I were more self-aware, I would tell journalists that I'm trying to figure out who I am, but in the meantime I have a pretty good idea of who I'm not.  I'm not my clothes.  I'm certainly not my game.  I'm not anything the public thinks I am.  I'm not a showman simply because I come from Vegas and wear loud clothes.  I'm not an enfant terrible, a phrase that appears in every article about me.  (I think you can't be something you can't pronounce.)  And, for heaven's sake, I'm not a punk rocker.  I listen to soft, cheesy pop, like Barry Manilow and Richard Marx." (Open, Andre Agassi, p. 117)

I found the book to be a bit of a rollercoaster.  I found some sections of the book more interesting than others.  He's writing about his career - which is tennis - so it makes sense that a majority of the story will be about just that - tennis.  There were some sections that were very... tennis.  Kudos to the fact checker who made sure that the tournament name, opponent name, round number, and match scores were accurately represented in the book!  I found I kept reading, waiting for the next piece of information about his relationships!

I think you really need to have an appreciation for tennis or a love for Andre to fully appreciate this book.  If you don't have a love for either, I'm not sure that it would be on the list of your top reads.  I enjoyed reading Open, but I can see how it wouldn't be everyone's cup of tea.

There were many quotable moments in his book... I'll leave you with this one.


"It's no accident, I think, that tennis uses the language of life.  Advantage, service, fault, break, love, the basic elements of tennis are those of everyday existence, because every match is a life in miniature.  Even the structure of tennis, the way the pieces fit inside one another like Russian nesting dolls, mimics the structure of our days.  Points become games become sets become tournaments, and it's all so tightly connected that any point can become the turning point.  It reminds me of the way seconds become minutes become hours, and any hour can be our finest.  Or darkest.  It's our choice."  (Open, Andre Agassi, p. 8)