This book did not disappoint.  I was looking for another good mystery novel and that's exactly what I got.  I have always been impressed with Harlan Coben's novels and his ability to make me a) carry his book around everywhere I go, b) sit down for hours at a time and continuously flip the pages of his novel, and c) stay up late until it's finished.

After reading those few non fiction books and some light summer reads, I thought it was about time that I got lost in another Harlan Coben novel.  This time, I chose one of the few novels that I haven't read by him, Play Dead.  Like I mentioned, I have loved every book that I've read by him in the past and this one was no exception.  (I may even have to go back and re-read a few that I remember really loving!)

At first I was hesitant to read it.  At the beginning of his book, Harlan Coben writes a short note to his readers.  He tells us, "Okay, if this is the first book of mine you're going to try, stop now.  Return it.  Grab another.  It's okay.  I'll wait."  He wrote this book when he was in his early twenties, and it was released for print in 1990.  He explains that he is not the same writer now as he was back then.  But that's okay - I liked the book anyway and I'm glad I kept reading. (Some other people who have written online reviews were very disappointed... I, however, thought it was still good and it kept me reading.) 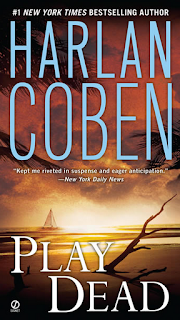 Now onto the challenge of reviewing this book without giving too much away!  The book is about a Hollywood couple, Laura Ayars and David Baskin.  They were on their secret honeymoon in Australia when Laura went out for a quick business meeting.  When she returned, she was left with a note from her husband saying he had gone out for a swim.  He never returned.  Despite the coroner reports that say David drowned, Laura suspects some foul play and takes it upon herself to start finding answers.  Some secrets, as much as 30 years old, start to surface and prove that this is all a little deeper than we ever imagined it could be.

As I was reading this book, I was starting to think that I had many things figured out.  There was a lot of foreshadowing and most people are able to put two and two together.  (I mean, come on, you can read the title of the book and figure out something!)  Half way through the book, I was even wondering why Harlan Coben needed another 200 pages to tie up the ends that I had already figured out.  Oh, how wrong was I.  Despite what I thought was happening, there were new facts that kept arising, changing the story entirely.

I would recommend this novel (as I would any Harlan Coben novel!).  If you're looking for a book that will keep you in suspense until the very last page, consider this one.  And consider his other novels, too!
Posted by Sarah at 10:16 AM