"Some guardian angels did a terrible job.  They were given work in the poor neighborhoods where none of the others wanted to go.  Every delinquent kid had one of these miserable angels who made sure that they made the worst of every situation.  These angels loved when people did the wrong thing or took risks.  You can't have that many bad things happen to you without some sort of heavenly design."  (lullabies for little criminals, Heather O'Neill, p. 285) 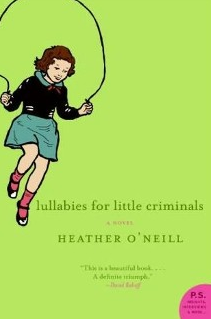 The story is told from the point of view of a twelve-year-old girl named Baby (who turns thirteen in the book).  Her parents had her when they were in their teens and her mother passed away when Baby was a year old.  She's living with her father in Montreal, moving from apartment to apartment trying to survive.  Her father is a drug addict and seems to go from highs to lows, and from nice dad to mean dad, on a daily basis.  You get a chance to see their relationship when it's at its best and when it's at its worst.  Baby has all the freedom that a twelve-year-old shouldn't have.  Throughout the novel, she gets sent to a detention center, gains a friend in a local pimp, and experiments with drugs and prostitution.

Maybe I just wasn't in the right mindset for this novel, but it wasn't my favourite and I found that it was a lot to handle.  You find yourself getting attached to Baby because she's such a young girl.  It makes your heart hurt when you hear about how she's doing drugs, selling her body, and basically living alone in the street.  At times, the content and descriptions in the novel almost made me feel uncomfortable.  (I feel like you could open to book to almost any page, read a random paragraph, and understand that she is leading a rough life.)  No young child should ever have to go through this, but the reality is that some children do have to deal with these types of obstacles.  This book made me thankful for my family, the environment that I grew up in and the experiences that I was able to have as a child.


"I don't know why I was upset about not being an adult.  It was right around the corner.  Becoming a child again is what is impossible.  That's what you have legitimate reason to be upset over.  Childhood is the most valuable thing that's taken away from you in life, if you think about it."  (lullabies for little criminals, Heather O'Neill, p. 77)