We Bought a Zoo (Benjamin Mee)

I got We Bought a Zoo by Benjamin Mee for my Birthday from my brother.  For those of you who know that my Birthday was yesterday, don't be amazed that I'm finished this book already...  I opened this present a little early, since my brother was on his way out of town for work for a few weeks.

My main interest for this book started when I saw the preview for the 2011 movie.  To be honest, I probably would never have found this book had this movie not come out. 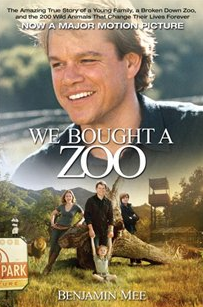 Basically, meet Benjamin Mee, a DIY writer.  His father recently passed away, leaving his mother alone in a house worth half a million pounds (yes, pounds, not dollars!).  His mother is ready to downsize, but when Benjamin hears about a rundown zoo that has recently come on the market, he convinces (most) of his family to take on the task of revamping the zoo.  During this process, there are many obstacles, such as his wife having a brain tumor (I didn't give it away, it's on the back of the book), the amount of work that is required on many of the animal enclosures, restaurants and restrooms, as well as the lack of money since there is currently no income for this zoo.  The book basically travels through Benjamin Mee's experiences from buying the zoo to trying to secure funding to renovating numerous areas throughout the park to his experiences with learning about the animals.  The book ends on opening day of Dartmoor Zoological Park.

I just want to say how good the story behind this book is.  I think it's amazing and very uplifting how this family was able to reopen a zoo that was in the condition he describes, especially considering the lack of skills that Benjamin Mee had when he first purchased the zoo.  He probably learned so much about himself and his family throughout this process, and based on how he talks about his experiences throughout the book, you can tell that he absolutely loves what he has done for himself and his family.

Benjamin Mee was a writer before he bought the zoo and published this book, so there is no doubt that the book is well written.  I did find, though, that the book was written more like a report than a story.  He moves from topic to topic in an order that makes sense (although not always in a chronological order, since he is sometimes adding in his past experiences with the animals at various points throughout the book) and the book does start where you'd expect and end at a good point.

The sentences, paragraphs, and chapters were all fairly long and I found that I really needed to be concentrated on my reading throughout this book, or else I'd be reading the same page over a few times before it sunk in.  (This is not ideal for reading at lunch time on supply teaching days!)

While there are many personal memories (such as when he was nearly attacked by a porcupine in the middle of the night) that make you smile, there is a lack of conversations between individuals.   While I don't want to judge the movie without having seen it, I'm wondering how well the events in the movie actually represent what happened at this zoo.  I already see so many things that are different than the book.  (I did just read on the Darmoor Zoo website that in the movie, the zoo has been renamed and that the zoo is based out of California.  "Based on a true story" means that the idea came from the book, right?  I guess that any and all publicity of the book and their zoo is great for them to ensure that they have the funds to keep the zoo open.)

The verdict?  Read it if you're into non fiction and if you have some time to sit and laze around on the couch with a book.  The story is very worthwhile.  (I may have even shed a tear at the end...)  It was good and I'm still very excited to go see the movie.
Posted by Sarah at 8:18 AM