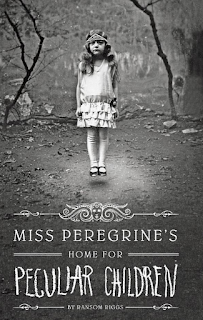 I bought this book with a gift card I received for Christmas.  Basically, I was at Chapter's and wanted to take advantage of the 30% off hardcover boxing day sale.  I searched on their computers for top 2011 picks and Miss Peregrine's Home for Peculiar Children by Ransom Riggs showed up under Top Teen Books.  (And once again, I did judge the book by the cover... Doesn't that picture make you want to read it?)

The story is centered around Jacob, a sixteen-year-old boy who used to believe everything his grandfather told him (because who doesn't believe these fairy tales as a young child?).  Jacob's grandfather, Abe, then whispers his final words to Jacob, filled with weird ideas and confusing information.  When his terrifying nightmares start, Jacob journeys to an island near Wales to find some answers.  If nothing else, Jacob's family hopes that this journey will help him distinguish between fantasy and reality.  Once there, he finds "Miss Peregrine's Home for Peculiar Children" and begins to believe that these children, who were in fact "peculiar," may still be alive.

Sounds a little weird, right?  The first hundred pages seemed like they could be very real - no talk of magic - everything seems to be based on Jacob's imagination.  Later in the book, though, there is some "magic" (if you want to call it that!)  There is some time travel - that is, Jacob, who has found the home for peculiar children and knows that something is up, finally finds the entrance to their loop, which is a different world and relives September 3, 1940, over and over again.

Now what do I mean when I say the children are peculiar?  Well, one of the boys is invisible, one girl has super human strength, another girl can light a flame ball in her hand, and another boy releases bees from his body every time he opens his mouth.  Sounds weird, but it actually makes a lot of sense in the story.

This story mixes real photography from old collections with a new fiction story. I really loved how these very strange photographs were used to tell a creative story.  Just looking at the pictures is cool enough, and then reading the story that "goes along with them" lets you use your imagination and really get into the plot.

The storyline really kept me interested, especially near the middle and end of the book, where there is a lot more adventure than there is at the beginning.  Without too much of a spoiler... while the book could be a standalone book, I feel like there could possibly be a second one on the way, with the story left kind of wide open at the end.