I got this book for Christmas, but I've had my eye on it for a while.  I've heard some good things about the book and decided that I was ready to try it.  I also saw her on The Ellen Degeneres Show and she was hilarious... Check out that appearance here and here. 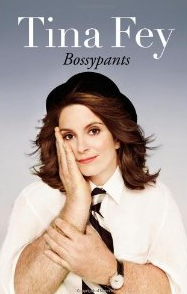 In Bossypants, Tina Fey describes many things she has experienced in life and her stories make her seem somewhat more 'human' and down to earth.  She discusses important times in her career (such as her years at SNL or on 30 Rock), her honeymoon, her college years, photo shoots, and being a mother.

I read the book from start to finish in about a day, but you could also pick a specific chapter that you're more interested in and read that.  It's not the type of autobiography that you would need to necessarily read in order.  She wrote well and since she is pretty funny, this shone through in her writing.

Now, I should tell you that I'm not a "must watch" Tina Fey fan.  I think she's funny and I do like her when I see her in movies or on television, but she's not one who, in the past, I have rushed out to see in a new release.  I think that someone who has watched her for those many years on SNL or who has been a fan of 30 Rock would definitely like certain parts of the book more than I did.  (I didn't get some of the 30 Rock stuff since I've never really watched much of the show... But lately, I have debated picking up a season).

However, that said, there were so many parts of the book that were funny and heartfelt regardless of whether you have seen all of her shows and movies.  Who can't laugh at her honeymoon experience (where there was a fire on a cruise) or her commentary that goes along with a photo shoot? While it is non fiction, there were many chapters that were not specific to events in her life, but just her insights into some of her experiences.

The book was an easy read and it was definitely funny.  If you can watch the clips of her on Ellen and be intrigued like I was, then I think you'd enjoy the book.  It did definitely make me laugh and say to whoever was nearest me at the time, "You have to listen to this..."
Posted by Sarah at 4:08 PM

Email ThisBlogThis!Share to TwitterShare to FacebookShare to Pinterest
Labels: Bossypants, comedy, I liked it, it was funny, it was good, non fiction, The Ellen Degeneres Show, Tina Fey