I'd heard about The Night Circus from a few different sources.  It made numerous "Top 2011 Picks" lists last year and I also really take to heart recommendations from friends.

It took me way longer to read The Night Circus than it should have.  I found when I picked it up and started reading, I couldn't put it down... Yet for some reason, I had put it on hold for a bit there.

Here is my list of excuses:
Basically, there has been more TV watching in my free time recently than there has been reading.  This all changed when I went, "Wait!  I borrowed The Night Circus from the library and it's due in 2 days?! Gotta get on it!" 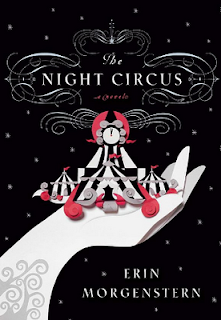 I really enjoyed The Night Circus by Erin Morgernstern.  The circus arrives in any given town on any given day.  This circus runs only at night and is black-and-white themed.  This isn't just any circus.  Here, two magicians (Marco and Celia) are in a dual and neither one of them is aware that there is to be only one winner (survivor) at the end of it.  When they fall in love (and find out the reality of their situation), they must play out the dual.

When I first read what the book was about, I immediately thought, "Like The Hunger Games?  It's a fight to the death?"  However, this book is very much not like that, so if that's what you're expecting you won't see it.

Morgenstern uses such good descriptions that you can imagine being there and being part of the experiences.  It was wordy, but not in an annoying way, because you really get kind of mesmerized in the words (and their magic).

The book moves between different times and places, so my suggestion to those who are going to pick up this book (which I would highly recommend) is to make special note of the date and place of each chapter.  You start to make some great connections between characters as you're reading the book.

I loved it and I would recommend it to anyone (again, if you're down with the whole magic thing, because I know that this isn't everyone's style).  It's a love story mixed with the magic of an entirely different world than we're used to.

Email ThisBlogThis!Share to TwitterShare to FacebookShare to Pinterest
Labels: Erin Morgenstern, Fantasy, i loved it, it was great, Love, Magic, The Hunger Games, The Night Circus