Being too early for the magazine (guess they really do mean that it will be out in November), I was wandering around during a 20% off sale.  I wasn't going to buy anything until I walked by the Young Adults table in the middle of the aisle.

Usually, I notice and kind of smile at how the Young Adults table is covered in vampire books.  I read the Twilight books and, while I liked getting caught up in the vampire craze at the time, I think I'm done with the vampire world (except for maybe the last two Twilight movies, of course).  This time, I also noticed The Maze Runner by James Dashner on the table.  Not being like all the other vampire books on the table, I picked it up and read the back.  I just had a feeling that it could be another book, like The Hunger Games, that would surprise me and bring me to another world. 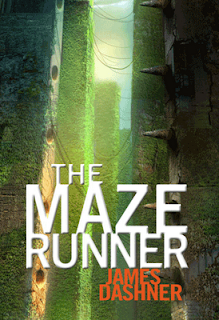 Let's start with a short description.  Thomas wakes up in a giant box that has brought him to a place called the Glade.  Around the Glade are large stone walls that open each morning and close each night, leading to a huge maze.  This place has a population that is make up entirely of kids - and they're all boys.  No one really knows why they are there or how to get out.  They only know that every month, a new boy shows up in the box, and that whoever sent them there is watching them and is providing them with the food and supplies they need to survive.  A day after Thomas arrives, there's an unexpected arrival in the box - a girl.  Things start to change in the Glade and everyone works hard to find the answers they need to survive and get out of the weird world they are in.

I'm not entirely sure where to start with my thoughts on this book.  I liked it - just not as much as I liked The Hunger Games.  I found that it took me a little while to get used to the language used in the book.  And, because of "how they do things" when someone first arrives at the Glade, there were lots of conversations at the beginning of the book that I found confusing - I understand that they have a system for how they introduce people to the environment, but there was almost too much running around in my head for the first few chapters.  Once I got some answers, I found that it all made a lot more sense to me.

I was intrigued throughout the book, really trying to come up with solutions for the problems these kids were facing in the Glade.  (And I feel uber smart because I came up what they tried in Chapter 42 before the author said it.)

You realize that they're all just kids and that they've been forced to grow up because of the situation they were put in.  I think there could be some great discussions around this theme, especially if this book was used in a classroom setting.

I am somewhat satisfied with the ending.  You feel a little relief for the tension you were feeling, but it does leave you with a twist in the Epilogue...  You kind of want more answers - answers which you hope will be answered in the next book, The Scorch Trials.  I'll probably reserve the next book from the library even though I'll have to wait a month or so before it's in (which is good news for the book - there is a wait list for it!).

If you're in the mood for something a little different - a book that has some real life themes mixed with a lot of imagination - then I'd recommend this.
Posted by Sarah at 7:06 AM