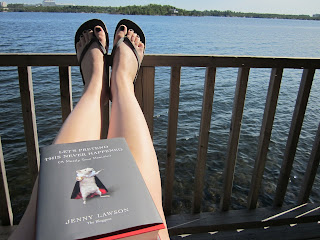 Where do I start with this book?  I have been following Jenny Lawson's blog, The Bloggess, for about 3 years now.  A friend introduced me to the blog and I loved reading it because it was so funny.

Jenny Lawson has now written her Mostly True Memoir called Let's Pretend This Never Happened.  It was hilarious.  I was sitting outside reading and probably getting weird looks from my neighbours because I was laughing by myself.  They clearly hadn't read the book and just didn't understand how funny it was.

To get a sense of her writing style and to have a few laughs, maybe check out the picture that cost her $300 to take, how she never dug up a human corpse, her metal chicken named Beyonce, or the time she saw a sasquatch on the road. (Seriously, you should read them.)

I read the book in two days.  I just couldn't put it down.  Her writing is easy to read, not to mention hilarious, and you just want to keep reading.  It made me smile so much and I was honestly laughing out loud and reading excerpts to whoever was in the room with me.  Her stories are so ridiculous and you start to think, "How can all of this stuff happen to one person?" or "If this happened to me, my re-telling of the story wouldn't be quite so funny" or "I have led a boring life compared to hers."  (Well, ok, I haven't led a boring life, just a different life.)

I almost feel as if I read the book too fast and that I need to re-read it.  Although I think it would be better to get the audiobook for a second-round of the stories because I feel it would be SO AWESOME to hear her expressions as she tells the stories in the book.

I honestly hope she's not kidding when she says, throughout the book, "That story will be in the second book," because I really do want to read a second book by Jenny Lawson.  But for now, her updates on her blog will have to do...

And now, in the name of being ridiculous (which Jenny Lawson is a fan of), I have taken some pictures of Hamlet von Schnitzel visiting my place in Northern Ontario.


For my Ontario friends, specifically those in the Toronto area, Jenny Lawson (aka The Bloggess) will be at Indigo Manulife Centre (55 Bloor Street West... The Indigo at Bay/Bloor) on Tuesday, August 7th, 2012 at 7 pm.  Please go.  She is hilarious.  I wish I could go.  (I, however, already have tickets to the Roger's Cup... I'll have to catch her on her book tour for book number two!)
Posted by Sarah at 3:07 PM

Email ThisBlogThis!Share to TwitterShare to FacebookShare to Pinterest
Labels: i loved it, it was funny, it was hilarious, Jenny Lawson, Let's Pretend This Never Happened, Memoir, non fiction, The Bloggess